This article is a stub. You can help MoreCreeps and Weirdos Wiki by expanding it.

Robot Todd tries to kill Robot Ted. Robot Todd runs around making fun of how uncool and dumb Robot Ted is. He drops Batteries (which can be used to make atomic packets) when terminated. The Kid mob wears a shirt with Todd on it. If Robot Todd sees the player or Robot Ted, it will attack them. 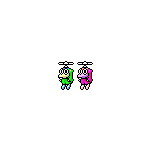